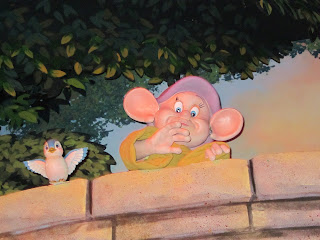 Today I opened my Google reader and was bombarded with news from the Official Disney Blog (and 2719 Hyperion, The Disney Blog, The Laughing Place,  GDP, Disney and More).  The new Fantasyland has even more in store for us!
The previous announcements had made Fantasyland sound like 'princess' land (It is still pretty heavy in that direction).  It seemed everything was coming up princess - Ariel, Belle, Briar Rose...but nothing for the first and "fairest of them all."
Until now - sort of.
The new Fantasyland has new plans include a seven dwarf mine train.  According the the official Disney Blog: "The Seven Dwarfs Mine Train will take you on a rollicking, musical ride into the mine “where a million diamonds shine.” The coaster will feature a first-of-its kind ride system with a train of ride vehicles that swing back and forth as they whisk along the track. The journey will be accompanied by music from the classic Disney film and animated figures of Snow White and the Dwarfs."
In addition, Snow White's Scary Adventure will be removed and in place a permanent meet and greet with the princess will go there: Princess Fairytale Hall. (No word when this will close but I am glad I went to Disney World this December to say goodbye - even though I didn't know it at the time).
So I'll accept that changes must be made to create the new and say great!  I can't wait to see it.
Just don't touch Disneyland's Snow White's Scary Adventure -
Posted by 1937 Fan at 9:13 PM