Look What I Got 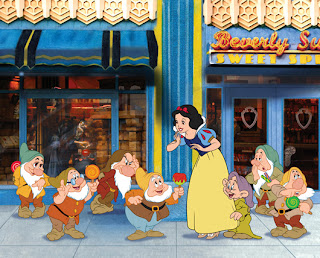 On March 12 Disney Hollywood Studios held an event to celebrate the release of the Disney Theme Park Exclusive Ink & Paint Cel Collection: Look What I Got.  Check out the details on the Art of Disney Park website.
Posted by 1937 Fan at 11:29 AM No comments:

The Seven Dwarfs Before Snow White

I have been decidedly remiss in my posting in the month of March - so we're now on to April and it seems I have missed some news -
What were the seven dwarfs up to before Snow White entered thier life?  A new pilot show announced for Disney Junior will explain just that:

7D (animated series pilot on Disney Junior)
Creators, including Walt Disney himself, have long been inspired to access classic folk and fairy tales... reimagining, reinterpreting and reinventing them for new generations. The animated series pilot 7D takes a new creative approach to the beloved Brothers Grimm tale of Snow White and the Seven Dwarfs, reimagining it in a comic and contemporary storybook world. The new music-filled stories introduce the whimsical world of Jollywood, where the kind-hearted Queen Delightful calls upon the 7D — Happy, Bashful, Sleepy, Sneezy, Dopey, Grumpy and Doc — for assistance.  (From D23 News 3/17/2011)

This show is still in production and more details are sure to come.  It is an interesting concept, but one that makes me more than a little nervous.  Time shall tell if they get it right.
Posted by 1937 Fan at 11:40 AM No comments: