Dopey: He Don't Talk None 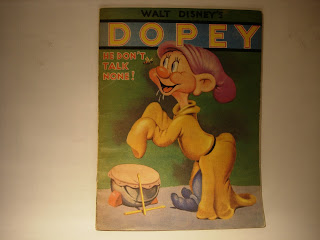 Walt Disney's Dopey: He Don't Talk None! is a linen book published in 1938 by Whitman Publishing Co.  The story is a collection of Dopey's antics: Last to leave the mine, Dopey finds a lonely deer so he hooks the lantern on the deer's tail to give the creature light and then uses a red jewel (he just happens to have up his sleeve) as a tail light on his own belt.
To avoid doing dishes Dopey plays with a pipe and soap bubbles, until Doc tells the men to grab him and put his to work, but again, Dopey runs off to play music. Well the dwarfs all dance and sing until Doc realizes that again Dopey has evaded work, and so as punishment: they all tickle him (of course, what other way would you do it?).
Suddenly it appears that all the dwarfs have just become too tired so Dopey falls asleep with a bunny for a pillow.  That morning the birds wake Dopey up with (I kid you not) " Tweet-tweet-tweet! Bag of lazy bones! Get up!"
Well Dopey feels ashamed, leaps up and begins to use the feather duster on everything.  Including Sneezy.  Well you can see where that would lead - Dopey ends up in a tree.
This book is one of my favorites as the art is beautiful in it.  It is about 9 by 12 inches in size.
Posted by 1937 Fan at 10:00 AM