To celebrate the new year, I am going to share some things from my personal collection.
Over the previous year I spent many, many hours cataloging and photographing my collection prior to moving.  This process took about two weeks (more? I can't remember now) and resulted in cataloging over 1,000 items.  So as I am now settled into the new space I'd like to take the time to share some of the items I have.  I'll begin in the month of January with my favorite things: books.  There is such a wide range of books that have been available going all the way back to just prior to Snow White's release in 1937. 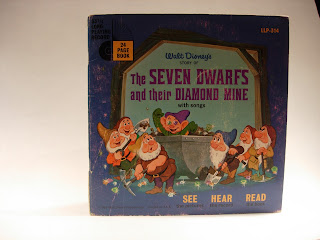 This book released by Disneyland Records under the Walt Disney Productions in 1967 featured 24 pages and an accompaniment record.  The art on the cover is adorable.  The story features the dwarfs waking up as in a normal day on their way to the mine only to discover a mysterious note.  They find a second note in Sneezy's shoe.  This all leads to unlocking a secret door in the mine that leads...right to the palace!
The record features Music in Your Soup and You're Never too Old to be Young, two songs that were written for Snow White by Larry Morey and Frank Churchill but never used.
Posted by 1937 Fan at 10:00 AM