Just a short post this week to say that I have been busy sorting through boxes and boxes of Disney items that I plan on posting on ebay.  (mostly non-Snow White items).  Be sure to check out my page!

I recently saw that there are these great nail wraps (stickers) that feature Disney characters from Jamberry.  I tried some non-Disney wraps and I was quite impressed.  I can't wait to get some Snow White wraps to wear at the next Disney function!  Be sure to check out these designs. 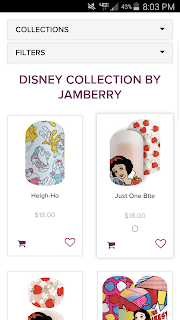 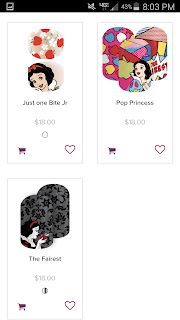 Disney Movie Rewards allows you to earn points when you purchase movies, some music, and when you see movies in theaters.  (They recently changed the rules so only CDs bought on the Disney Music Emporium site are eligible for points.)  Generally you earn 50 points when you see a movie in the theater, 100 for a DVD, and 150 for a Blu-ray.  With these points, you can redeem items.  On occasion, there are exclusive items available.  The first one I ever saw was back in 2009.  It was a Snow White and Seven Dwarfs ornament for 975 points.  Then in 2011 there was a keepsake box for 975 points and in 2012 a Snow White Apron was offered for 1,000 points.  In 2014, there was a Seven Dwarfs Mine Train Pin for 900 points.  As far as I know, these have been the only Snow White exclusive items offered...until now.  There is currently an exclusive poster with art by Eric Tan available for 1250 points. 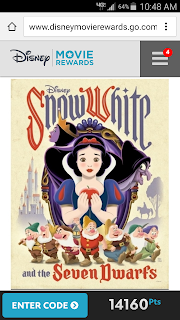 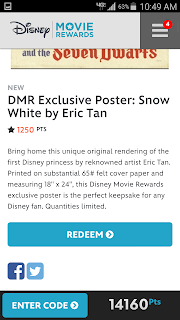 You may have noticed down at the bottom of my screen shot that I have 14,160 points.  Back in 2009 I wondered if I should keep saving points for the studio tour or if I should redeem for Snow White items.  I've decided to do both.  I will redeem points for one of these posters and very soon, I will be able to get the tour.  In 2009, the tour was 20,000 points.  It seems that the points were lowered to 15,000 points at some point, but I don't remember when.  If I had never redeemed any points, I would be at 17,885.

However, I recently noticed the the rewards website started offering 3 different tour levels with new point levels: Silver, Gold, and Platinum.  I did a comparison of the levels to help me decided which one I want to go for. 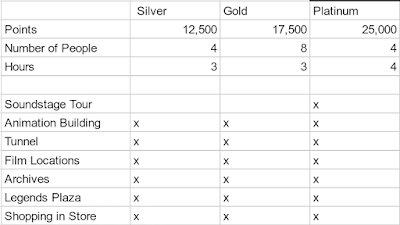 What are your thoughts?  What would you do?

I was watching Mickey Mouse shorts (Season 3 Episode 15 - Sock Burglar) the other day when I noticed this scene: 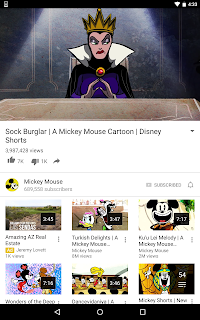 Basically, Minnie Mouse is trying to solve a series crime in town and for one scene she is interrogating all of Mickey's foes (Pete, the Blot...) when the Evil Queen appears.  Such a fun moment.

A while back I bought the season one DVD of these cartoons and posted about the Snow White reference I saw.

Additionally, if you haven't seen Mickey Mouse's Wish Upon a Coin (season 3 episode 3) - watch it now!  Any Snow White fan will appreciate the zany world where Mickey collides with this not so classic tale.


My summer project will be to watch all of season two and three to find any other Snow White references!
Posted by 1937 Fan at 9:00 AM No comments: