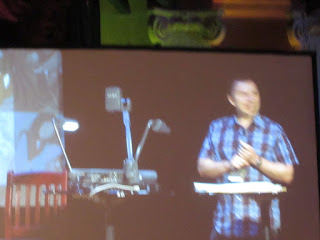 The morning continued with Disney animator Andreas Dejas taking the stage.  He brought art from Les Clark, Freddie Moore, Bill Tyla, Woolie Reitherman, Ollie Johnson, Marc Davis, Frank Thomas, John Lounsbery, and Milt Kahl.  Dejas treated the D23 audience with some insight into the creative process by drawing some of the charaters he worked on: Mickey Mouse (worked on the Mickey that appeared in Roger Rabbit), Crazy Mickey in Runaway Brain, Scar, and Jafar.  He even brought some drawings that Eric Larson drew for him after they met to help Dejas understand some of the important principals of animation.  After the lunch lesson, some of the lucky audience members found themselves the proud new owners of a drawing from Dejas. 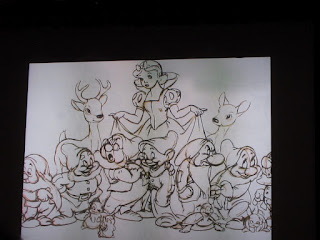