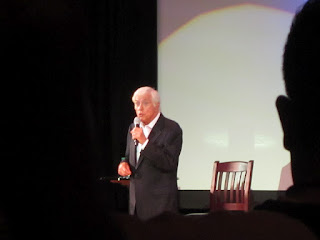 The last even of Destination D's Saturday line up was the amazing Dick Van Dye and the Vantastix.  The D23 members were so excited and the group did not let down.  They preformed all the major hits from Dick Van Dyke's career and more!  Chitty Chitty Bang Bang, Put on a Happy Face, Rosie, Jolly Holiday with Mary, A British Bank (with Dick Van Dyke treating us to a look into his character work), You've Got a Friend in Me, Bare Necessitates, Baby Mine, Accentuate the Positive, Me Ol' Bam-Boo, Fly Right, Dick Van Dyke Theme Show Song, Chim Chim Cheree, Step in Time, Supercalifradglisticexpialdocuis, Spoonful of Sugar (as a rap!), and Let's Go Fly a Kite.

They were asked to preform at an event honoring the Sherman brothers.  The group decided to sing a song from Jungle Book for their performance.  When the performance was over, the brothers thank them and informed the group they choose the one song they didn't write. 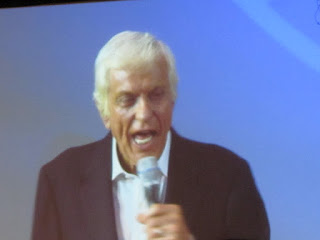 The group became a group after Mike Mendyke bumped into Dick Van Dyke in a Starbucks where the conversation went something like this:
"You're Dick Van Dyke!"
"I Know!"
They got to talking and the result was Dick asking him to bring some friends and come on over and sing.  So, he called Bryan Chadima and Erick Bradley, and they went over to Dick's house, had pizza, and sang.  A group was born. 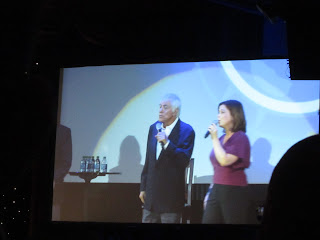 For part of the performance Dick's wife come on stage to sing Go to Sleep Little Baby, Those were the Days, Cheers theme song, a Cigarette commercial, and the Jefferson's theme song.

It was a fabulous performance that we all really enjoyed.  Such a treat!  Of course, you could by the groups album in the D23 store.
Posted by 1937 Fan at 9:00 AM