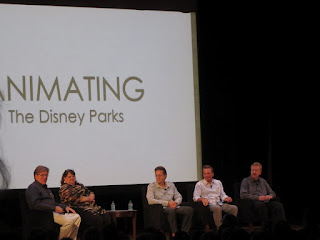 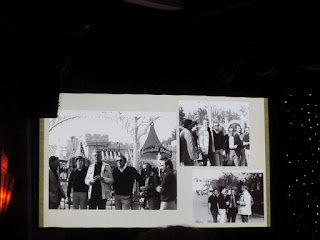 The first animator the panel discussed was Claude Coats.  They discussed his role on Haunted Mansion, Storybook land, Adventures thru inner space, primeval worlds, and rainbow caverns.  Coats was able to successfully get color water to stay separate, keeping the beautiful color.  Baxer also related that he wanted to do the color water from rainbow caverns for Big Thunder Mountain, but it wasn't approved.  The panel also discussed that Coats understood that the dark rides have to happen at night.  You can't paint the sky and see the lines of walls meeting, it won't work.  However, make the sky black, and you can't see lines and the audience believes it's night. 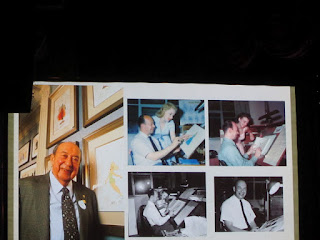 What Claude Coats did for the envirment on attractions, Marc Davis did for character on attractions.  The D23 audience was treated to a video of Marc Davis that had only been shown once at an event after his passing away. Herb Ryman understood the importance of details.  When working on Disney World, a bridge was needed to connect Liberty Square to the hub.  Ryman's idea was to use the Concord bridge rather than just a bridge because the cost would come out the same, but using the Concord bridge as a model would provide a historical context.  They also discussed Ryman's role in New Orleans square.  It was designed to be specifically vague.
The panel was running long so they quickly touched on John Hench's annual Mickey Mouse portraits.
Posted by 1937 Fan at 9:33 AM