They Made the Magic: Milt Kahl 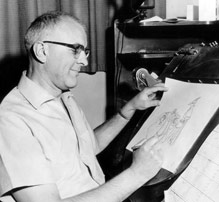 Milt Kahl, one of Disney's nine old men, was born in San Francisco on March 22, 1909.  In 1925 he began working for the Oakland Post Enquirer as a layout artist and illustrator.  While working there, Kahl worked with Ham Luske, who also ended up working for Disney.  He then worked for the San Francisco Bulletin, drew movie ads, and took art classes where he met fellow students Frank Thomas and Ollie Johnston.

After seeing Three Little Pigs, Kahl decided to become an animator.  He joined the Disney Studio as an inbetweener on June 25, 1934.  He worked as an assistant for Bill Roberts.  There he was quickly promoted to assistant animator.  He later was promoted to the position of supervising animator over the artists. 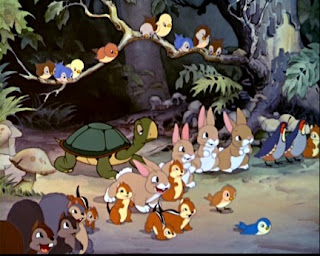 In an interview  in 1972, Kahl said that on Snow White and the Seven Dwarfs he animated the forest animals along wit Eric Larson, Louis Schmitt, and James Algar.  However, J. B. Kauffman noted that Kahl also worked on the log alligators, and even helped on some scenes of the Prince.

During Pinocchio's production, Kahl redesigned Pinocchio and found success as a character designer.  He became known for his work on difficult characters (especially human ones): Thumper, Alice, Peter Pan, Wendy, Tramp, Prince Phillip, Brer Rabbit, Bear, and Fox, Shere Kahn, Madame Medusa, Anita, Roger, Sir Ector, Madam Mim, Georges Hautecourt, and the Sheriff of Nottingham.  Kahl joined Jack Hannah and Ollie Johnston to lecture at Cal Arts where the students included John Lasseter, Brad Bird, and John Musker.  During this lecture he said: " your princes and princesses and hero-types have always been the most difficult.  That's been one of my frustrations over the years, because there are so many things I would have loved to have done on those pictures, like Captain Hook, the Queen of hearts, and, of...Ichabod Crane.  But,  I'm stuck with Peter Pan and Wendy and Alice and the Prince in Sleeping Beauty.' (Walt's People Volume 7)

On the short Ferdinand the Bull - Kahl even provided the one line of the bull's dialogue.

For additional information and video, check out the Oscar's past event; Milt Kahl: The Animation Michelangelo.
Posted by 1937 Fan at 9:00 AM

Labels: Milt Kahl, Snow White, They Made the Magic