This week I had the opportunity to eat in the Carthay Circle Resturant.  What a wonderful experience that was!  But first a little history: 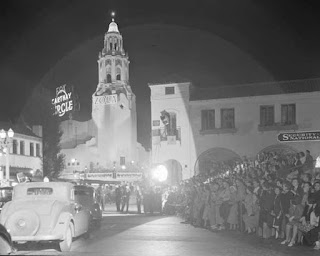 The Carthay Circle Theatre (desgined by A. Dwight Gibbs) opened in 1926 as part of the West Coast Theatres and then joined with the Fox theatre empire.  Fifteen hundred seats were arranged in a circle around the main screen.  The theatre was located at 6316 San Vicente Boulevard, Los Angeles, CA 90048 and featured the Spanish Baroque style and art featuring pioneers settling in the west.  Orginally the street name was Eulalia Buleilvard but it was later changed to San Vicente.  It was considered on par with the Mann Chinese Theatre that still stands today.  It orgianally showed silent pictures and had a Wurlitzer Theater Organ.  The very first movie every played was the premiere of Cecile B. DeMilles'
Volga Boatman."  In 1937, Walt Disney's Snow White and the Seven Dwarfs premiered.  Other movies that world premiered there were El Cid, The Alamo and The Life of Emile Zola. Memorable reissues that played there included Gone with the Wind, The Great Ziegfeld, Mary Poppins, and Fantasia.  During a live performance in 1955, durng a performace of 'The Shrike", actress Isabel Bonner died of a brain hemmeroge on stage.  In 1956, the theatre showcased "Around the World in 80 days" where some the interior had to be removed to accommodate the huge new screen.  The final film played in the theatre was "The Shoes of the Fisherman" (starring Anthony Quinn) in November of 1968.  In 1969 the theatre was demolished and replaced by offices.  The theatre is captured in three movies:  Hollywood Hotel, Caprice, The Comic.  To see some great photo and links see the Movie Palaces website.


Now back to the present.  The Carthay Circle Resturant and Lounge in California Adventure stands at the end of Buena Vista street.  There is a plaque on the outside of the building that explains it's historical significance: 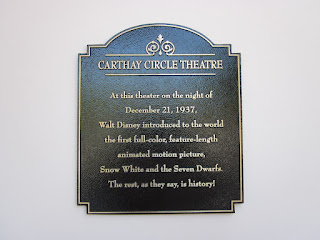 Once you enter the building, there is an entrance foyer that has lots of black and white photos of the orginal theatre.  All the way on the left wall there are two frames on either side of a large floral arrangement.  Check out what is inside the frames: 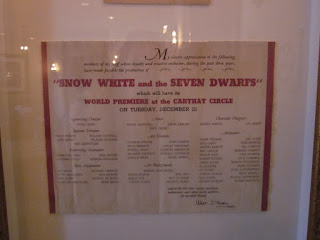 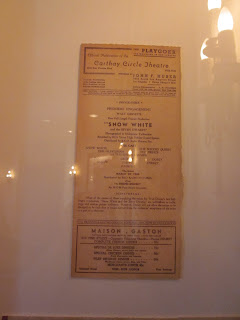 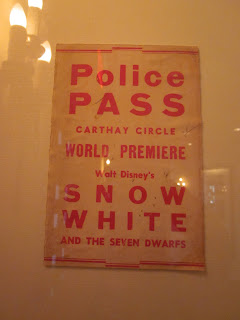 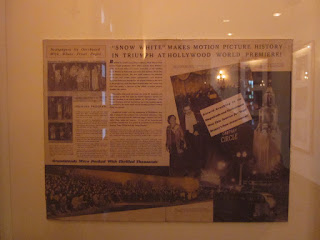 Once you enter the acctual lobby, there are pictures all over the wall featuring Walt Disney at different premieres and events in Hollywood.  There are quite a few pictures featuring the Snow White and the Seven Dwarfs (especially behind the hostess).  To the left is the lounge area where each menu features a page with the back story to the Carthay.  Also in the lobby is a display alcove.  Currently there are orginal cells that belong to Dianne Disney Miller on display - they will only be on display for a few months before something new is put in. 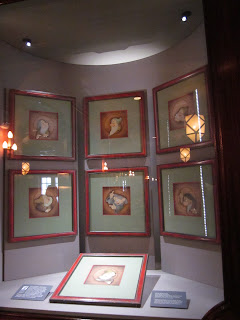 I recommed going into the lobby even if you aren't planing on eating in the restaurant.  There are lots of pictures of the premiere of Snow White and Mary Poppins (both were at the Carthay Circle Theatre) 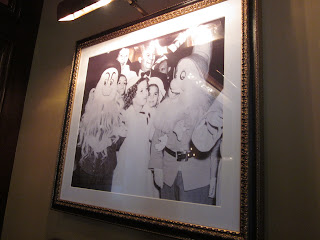 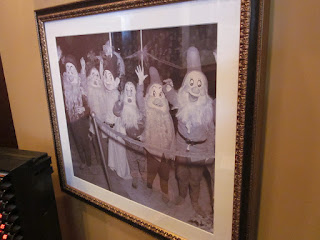 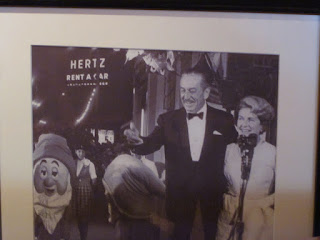 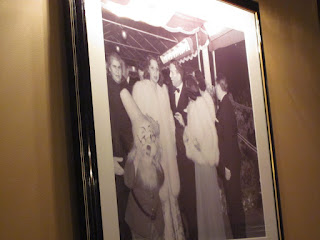 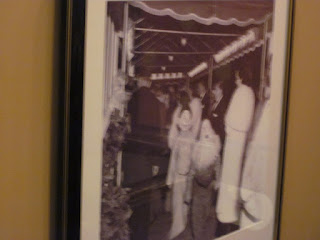 Once you go upstairs into the actual restaurant you're taken into the large center room with vaulted ceilings.  If you are not fortunate enough to eat there, be sure to look up as the they are painted with backgrounds from Snow White: the queen's castle, the frightening forest, the dwarf's cottage, and the path to the mine.  Three are not obvious representations, but you can see small touches that indicate where the location is. 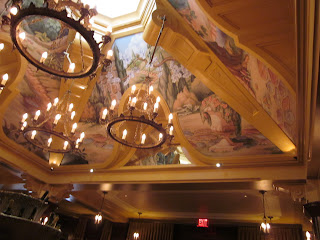 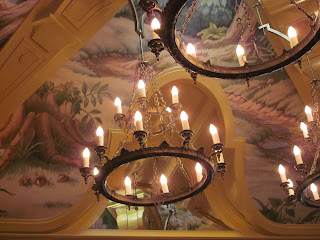 The resturant also features several private rooms.  Our wonderful server filled us in on an interesting touch in one of them.   The center private room has a large round table and the support underneath is the wishing well: 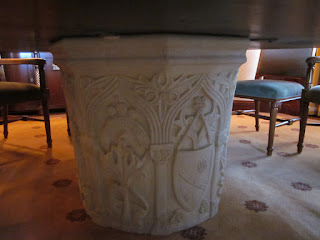 Our server also said that the dripping candles were made to look like the one's in the film and the light fixtures were based on the ones in the Queen's dungeon. 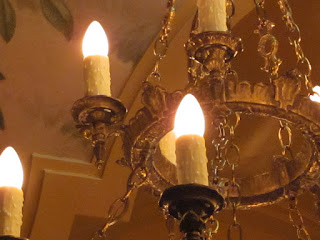 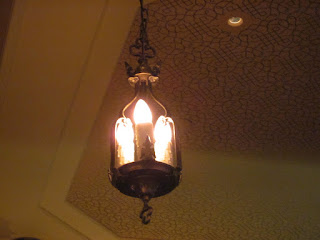