They Made the Magic: John Lounsbery 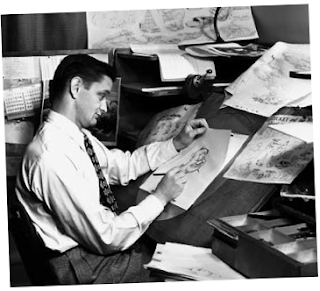 Born March 9, 1911, Lounsbery joined the Disney Studios in 1935 as an inbetweener.  His early work included Pluto.  He soon became an assistant to norm Ferguson and helped with the Witch in Snow White.  Lounsbery once said his favorite character was Ben Ali - the dancing alligator in Fantasia.  He also worked on Honest John in Pinocchio: D23 interviewed Andrea Dejas about Lounsbery's contribution in a 2009 article.  For more details about his work and life: read this.  Lounsbery earned the ranking of one Walt Disney's nine old men; that group of animators that played such a key role in the early days of the Walt Disney Studio.
John Lounsbery died on February 13, 1976. Upon his untimely death, he was still giving Disney his all as one of the directors of the animated feature "The Rescuers."  He became a Disney Legend in 1989.
Posted by 1937 Fan at 9:00 AM

Labels: John Lounsbery, Snow White, They Made the Magic