They Made the Magic: Claude Coats 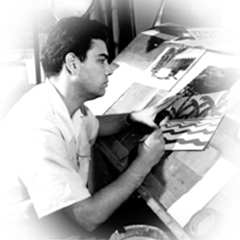 Happy belated birthday to Claude Coats, born January 17, 1913.  Coats was hired by Disney in 1935 as a background painter.  He worked films from Snow White to Peter Pan.  On Snow White he worked on the castle and bar-of-soap sequences.  In 1965, he moved over to WED where he worked on attractions such as Pirates and Haunted Mansion.  He received a 50 year service pin from the Walt Disney Company and after retiring in 1989 was named a Disney Legend in 1991.  He passed away the following year.
Posted by 1937 Fan at 10:30 AM

Labels: Annimation, Coats, Snow White, They Made the Magic