D23 preview of the Treasures of the Walt Disney Archives 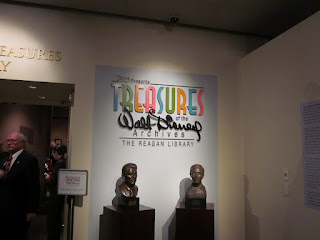 Last night I went to the preview night held for D23 members at the Reagan Library in Simi Valley, California.  I've been to this presential library quite often as it's a major field trip for the grade level I teach, so I've always been impressed with the museum itself (how often do you see air force one in a beautiful glass building?).  I think a visit to this presidential library is well worth your time, but now?  For sure!

The archives display has nine areas to it:
Walt's Early Years, The Golden Age of Animation, The Hub of a Creative Empire, A Bold Entry into Live Action, An area I'm not sure what the offical title was but that, I am calling: modern Disney movies with a little Marvel and theme parks thrown in for good measure, A Renaisance for Animaton, National Treasure,
Patrioic Legacy, the no official name Exit Room

In order to accomidate the exhibit, a whole new area was added (a semi-permant tent buildig is what I'm calling it) off the museum.  The exhibit is a good size, there is a lot to see and I was very impressed.

When we arrived, we lined up to check in and when doors opened we went right into the Disney area by passing the rest of the museum (along with everyone else) so it was a little slow at first, but there was so much to see.  We spent about an hour and a half walking through and exploring the exhibit the first time. 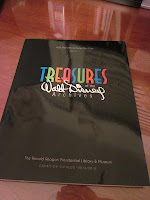 The entire museum stayed open until 10 for the event, so we did take a picture wearing Mr. President mouse ears in front of Airforce One and walked around the museum.  We also were able to go through the Treasures exhibit again and get better photos with less people around and enjoy some of the video throughout the exhibit.  Bob Gurr and Dave Smith were there signing their new books as well.  They also would sign the archives catalog sold in the gift shop.

And, as to be expected, there are several shopping opportunities avialiable.  The Treasures catalog is great and includes some interesting facts and great photos.  There are two specific Snow White photos in the book.  Also, there are two Snow White pins available for purchase: a replica of the opening sequence book and the Treasures logo with the dwarfs.

Overall I think the event was great; the museum staff and D23 staff were so excited and friendly - it was a wonderful evening.  It really is an impressive exhibit that any Disney fan should try to see.  It opens July 6 and tickets are on sale now. 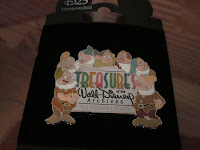 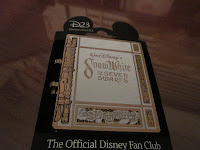 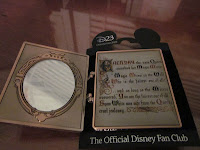 If you don't want to know what is in the exhibit - stop reading now!

For those of you who want to see more pictures of the exhibit (including non-Snow White related) see the album below: