They Made the Magic: Joe Grant 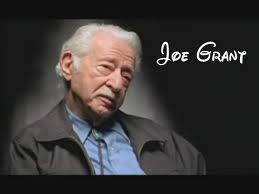 Joseph Clarence Grant was born May 15, 1908.  When he was two, the family moved to Los Angeles.  His career began with The Los Angeles Record where he drew caricatures of famous people weekly.  These caught the eye of Walt Disney and Grant was asked to draw for Mickey's Gala Premier.  A few years later, he joined the studio full time.  He briefly worked on Who Killed Cock Robin? and then began work on Snow White and the Seven Dwarfs.
Grant related in an interview that he based the concept art on the queen on a woman who lived across the street from him who picked persimmons and carried a basket.  He didn't like people to know that and only shared in when he was confident she had passed on.

During work on "Snow White" in 1933, Walt Disney came up to Grant in a hallway of the Hyperion studio in Loz Feliz and asked, "What are we going to do for an encore?" That question led to the establishment of the Character Model Department  He oversaw the people who worked with character design and models.  He was also important to the studio as a writer and gagman.  When the character Model Department was dismantled in 1949, Grant left to work on his own ventures (ceramics and greeting cards).  In 1989, he was asked to return to the studio where he became creative director.
The only artist to have worked on Fantasia and Fantasia 2000.
Grant became a Disney Legend in 1992.  He won an Academy Award for best short (Lorenzo) and passed away a few months later in 2005.  Two Guys Named Joe is a book written by John Canemaker that features the lives of two important animators: