They Made the Magic: Hal Adelquist 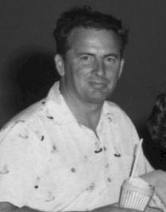 Harold Williams Adelquist was born in Utah on July 11, 1914 and moved to Los Angeles when he was six.  By 1933 he went to work for the Walt Disney Studios.  While working for the company he worked in the production, department, the story department, and the personnel office.  He was an un-credited assistant director on Snow White and the Seven Dwarfs.  In 1938 he began working for personnel, a difficult position to hold during the strike.  He later became the head of the story department.  In 1955 Adelquist was assigned to the Mickey Mouse Club to help Bill Walsh as the show's production supervisor.  After the first season, he began producing live shows for the Mickey Mouse Club Circus at Disneyland.  And here is where things began to fall apart.  At some point he was demoted to a talent scout and in 1956 It seems that the pressure was too much and he resigned from Disney, but later asked to be re-hired and Walt Disney refused.  It seems they and a falling out.  He died in Long Beach in 1981.
For additional information read more on the original Mickey Mouse Club website, or Cartoon Brew.