They Made the Magic: James Algar 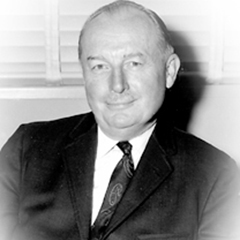 James "Jim" Algar was born June 11, 1912 and grew up in Modesto, California.  After graduating and attending Junior College, Algar attended Standford where he became known as a campus cartoonist working on the school's humor magazine.  After graduating in 1934 with a Master's Degree in journalism, he joined the Disney staff.
A friend of Algar's had gone down to Disney with a copy of the magazine that they both had worked on.  Ben Sharpsteen looked through it asking who did particular work, so Algar's friend gave Sharpsteen the contact information and later that summer, Algar got a letter to come down to the studios and try out for 2 weeks.  In fact, Alger was the one who hopped on the red car to where Frank and Ollie (Standford classmates) were living and suggested they come on out to Disney.
Alger employment card was 207 (or at least that is what he remembered years later) and his first assignment was on Snow White and the Seven Dwarfs.  Working under Ham Luske, he animated some of the animals; his favorite being the mother deer and her fawn.  When asked about the people who inspired Walt Disney during the making of Snow White he related Dave Hand, Perce Pearce, and Larry Morey.  He also recalled that Albert Hurter would draw little posts with faces on them; it wasn't his job to figure out how they were used, he just created the furniture.
He was later animation director on The Sorcerer's Apprentice and sequences in Bambi.  In 1948 Algar started writing and directing the True-Life Adventure episodes.  He lived among the lions in Kenya, whitewater rafted in Ten Who Dared, and filmed a buffalo stampede in The Vanishing Prairie.  He then went on to work on The Wonderful World of Disney tv show and The Gnome-Mobile feature film.  In 1964,  she worked on attractions for theme parks including Great Moments with Mr. Lincoln, Circle Vision 360, and Hall of Presidents.
Alger retired in 1977.  He was named a Disney Legend and passed away in 1998.
Posted by 1937 Fan at 9:00 AM

Labels: Jame Alger, Snow White, They Made the Magic