They Made the Magic: Bill Tytla 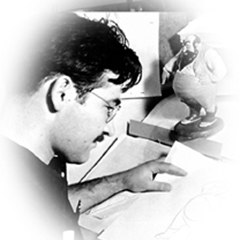 Grim Natwick wrote of trying to write about Bill Tytla for Cartoonist PROfiles "How does one start to write about a superb artistic talent?"  Natwick points out that Tytla was not one of the Nine Old Men - he taught the Nine Old Men.
Valdimir "Bill" Tytla was born October 25, 1904 in New York.  He dropped out of high school and went to Paris to study.  It was there that Paul Terry contacted him and by 1923 Tytla he joined Terry in New York.  In New York he met Ted Sears and Ben Sharpsteen.  In 1934 Tytla joined the Disney Studios where is first few assignments were working on Clarabelle Cow in Mickey's Fire Brigade and The Cookie Carnival among others.  Tytla said that the working conditions at the studios were terrific and that Walt Disney was miles ahead of the competition in all fields.
Tytla was responsible for many of the dwarfs but is perhaps remembered most for the way he animated Grumpy living up to his name  Natwick said that the scene where Grumpy is given a bath was an "impossible" scene to animate because of the difficult drawings and complicated staging, but Tytla accomplished it with "the determination of an artist with an undaunted spirit and the best mustache in the Studio." (Walt's People, Volume 7).  Tyla said of the time:
"Freddy Moore and I were responsible for the dwarfs.  There were seven of them, all the same size, and only one who didn't have hair on his face.  Each one was a separate color.  We animated all seven of them at once.  On Snow White, Walt always gave us directions.  We were all walking on tiptoes on that one.  We didn't know what to expect.  We were all full of kinds of emotions." (Walt's People Vol.1)
Frank Thomas and Ollie Johnson said of Tytla: "Fill was powerful, muscular, high-strung and sensitive, with tremendous ego.  Everything was 'feelings' with him.  Whatever he animated had the inner feelings of his characters expressed through very strong acting."
After the success of Snow White, Tytla became one of the highest paid animators in the studio.  He went on to work on Stromboli in Pinocchio, Socerer Mickey and Chernabog in Fantasia, and Dumbo (modeling the character on his own son).  He returned to the shorts department to work on the Giant in the Brave Little Talior.
Tytla joined Disney playing polo and bought a horse.  During one game, Bill's horse tripped and fell on him, injuring his pelvis; an injury he never fully recovered from.
In 1941, Tytla joined the strike at the Disney Studios.  I. Kelin remembered that Tytla didn't have a problem with the Disney Studios and suspected he joined the strike out of loyalty to his friend Art Babbit.  He returned after but things were never the smae, not getting the strong characters he once did.  He worked on Saludos Amigos and some of the war films but left in 1943.
Tytla worked for Paul Terry, Paramount, Tempo Productions and then tried his own production company where he animated shorts and directed commercials.
Bill Tytla died in 1968 and was named a Disney legend in 1998.
Posted by 1937 Fan at 9:00 AM

Labels: Bill Tytla, Disney Legends, They Made the Magic