They Made the Magic: Art Babbitt 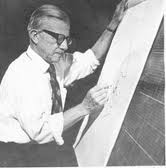 Born October 8, 1907, Babbit grew up in Iowa after leaving Nebraska early on.  Art Babbit began his career in animation in 1924.  He joined Paul Terry Studio in 1929, however he was so impressed with the Disney Silly Symphony The Skeleton Dance, he applied in 1932.  He worked on a variety of shorts and became instrumental in developing Goofy.  Babbit also helped establish the studio classes for animators taught by Don Graham.

Babbit moved over to animated features where he worked on the character development for Dopey and was the supervisor on the scene where the Queen becomes the Hag on Snow White and the Seven Dwarfs..  Babbit said of the scene: "You may have read that a lot of rotoscoping was done, but I have proof that I didn't rotoscope my Queen.  Live action was taken of an actress who acted out the parts.  I studied the live action on a Moviola, got it firmly into my brain, then put it away and never touched it again." Walt's People Volume 3.  Babbit was one of the highest paid Disney animator at the time.  He also worked on Pinocchio, Fantasia, and Dumbo. Babbit took legal action against the Disney Studios in 1942 because Babbit wasn't paid a bonus for Pinocchio.  In fact he was not payed a bonus for Snow White either.  According to Michael Barrier, there were two animators not payed bonuses (Dick Lundy being the other).  Babbit lost the suit as no one was paid for Pinocchio as the film ultimately lost money.

In 1941 Babbit led a strike against Disney that greatly effected Walt Disney and his studio.  He was hired back for a short time from 1943 to 1947.  In 1949 Babbit joined the UPA where he introduced the character of Mr. Magoo.  He stayed with UPA until 1952 and then in 1966 (until 1975) Babbit was in charged of Hanna-Barbera's commercial department.  Babbit continued his career working on projects with Grim Natwick and teaching in London.

Art Babbit was induced as a Disney Legend in 2007.  For more information read Animation World's extensive article, or check out the Art Babbit Blog.
Posted by 1937 Fan at 9:00 AM

Labels: Art Babbit, They Made the Magic