They Made the Magic: Scotty Mattraw 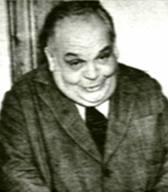 Scotty Mattraw was born on October 19, 1880 in New York.  A character actor, Mattraw appeared in may movies from the silent pictures to 1940.  Some of his pictures included The Thief of Bagdad, Babes in Toyland (1934), Wee Willie Winkie, and Grapes of Wrath.  Mattraw provided the voice of Bashful for Snow White and the Seven Dwarfs. Mattraw died November 9, 1946.
Posted by 1937 Fan at 9:00 AM

Labels: Bashful, Scotty Mattraw, They Made the Magic, Voice Actor