They Made the Magic: Ken Anderson 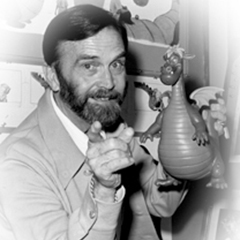 Born in Seattle on March 17, 1909, Anderson orginally studied as an architect.  He atteded school in Washington and then got a scholarship to study in Europe. His original ambition was to be an architect, but after not finding a job opening, he worked at MGM as a draftsman.
He began his Disney career in 1934 on a whim; he was driving by and his wife suggested he try Disney, and that was that.  While there he held the titles in: art direction, art supervision, story, color, styling, layout, production and character development.  It was Anderson who related the events of that famous meeting where Walt acted out the story of Snow White, in fact, Anderson related that they animators waited for Walt to act out the next story, be he never put on a performance like he did with Snow White.
Anderson related the story of that fateful evening to Don Peri:
"One night after we had been doing shorts,Walt gave us sixty-five cents for dinner, and the fifty of us in animation went across the street to Ma Applebaum's.  I got a dinner - most of us did - for fifty cents and saved the fifteen.  Then we came back to the little sound stage.  Ward Kimball and I sat next to one another.  Walt was in a subdued light on the main floor.  At one end of this grotto-like sound stage, there were seven or eight rows of seats baked rather steeply to a projection booth behind and a little screen across.  Then there was just like a dance floor, quite long and narrow, ad the lights didn't completely light this auditorium.  Walt had this whole thing for his stage.  He had thought out and dreamed this whole Snow White business.  We didn't know that.  He spent whatever time we got back from dinner - 6:30, 7:00- until nearly midnight acting and not only describing the plot and the picture, but acting out the individual characters and the parts.  He lit such a fire under those of us who were there that it never occurred to us we were ever going to do anything else in our whole lives except that picture" - Working with Walt pg.135
As art director Anderson worked on the scene where Grumpy's nose comes up over the bed as well as the 'party' at the dwarf's cottage, and the dream sequence that wasn't used.  Dopey's wiggling ears were developed by Anderson based on his own talent to do it too.  He experimented with the mutliplane camera and built a model of the dwarfs' cottage.  Like many of the other guys, Anderson would stay late - until midnight - and on the weekends, working on Snow White.  In fact Anderson felt that Snow White was the best they ever did.
Anderson was promoted to art director on Pinocchio, then production designer on 101 Dalmatians, and character development as well as art director on Jungle book.
In addition, Anderson designed  major portion of Disneyland's Snow White; it was the first attraction he worked on.  The idea was that guests would be Snow White and experience what she experienced.  However, after fifteen years of guests wondering where Snow White was, they made some changes to the attraction.  While working on Story book land, Anderson knew Snow White's cottage needed trees.  The trees they had were 12 feet tall, which in scale, would be 120 feet tall.  So instead Anderson found some redwood trees that were starved because they grew on a rock ledge and not getting the nutrients they need.  Van Damme State Park would not allow the trees to be taken, so in the end they had to find some in a similar place.
He retired in 1978 and continued to consult with Diseny until his death in 1993.  He was honored with a Disney Legend award in 1991.  You can find Ken Anderson's Bait Shop window on main street.
Posted by 1937 Fan at 9:00 AM