They Made the Magic: Ward Kimball

Born March 4, 1914, some of Kimball's earliest drawings were of trains, marking the beginning of a life long hobby.  He joined the Disney studio in 1934.  Later met his wife Betty (an ink an paint girl) there.
By 1936 he was the youngest full-fledged animator on staff working on Snow White.  Two of the scenes he worked on were cut: the soup scene and the scene where the dwarfs build a bed.  The soup sequence has the dwarfs singing and slurping up their soup.  The other has the dwarfs carving and creating a beautiful bed as a gift for Snow White.  After seeing the film, Kimball agreed with Walt  that the picture was about 15 minutes too long.  But what do you cut?  In  the end the scenes that were cut  were Kimball's. 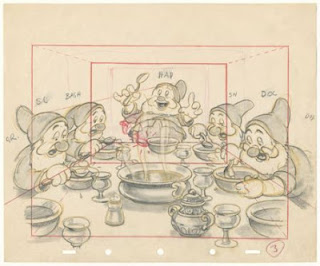 Kimball told of how hard it was to see his work disappear: "Well, my next assignment was with Pinocchio.  I felt so, not bitter, but discouraged, because I had worked so hard, and I had only been there 2-3 years.  To have the great Grim Reaper come in and cut out those two sequences was sort of a personal blow.  I took it very personally, even though I tried t look at it in a broader way - it was good for the picture - but I thought maybe there was something wrong with the way I animated.  I actually went into Walt's office to quite.  I decided I was going to New York after all.  As a tribute to his salesmanship, he sensed even before I got to the point where I said, "I don't think  should be working here," he took right off on me with a positive approach: a good defense is a good offense.  He, perhaps, sensed that I felt lousy and why I had come to his office, and he started waxing enthusiastically about Pinocchio.  It was going to be a wonderful picture, and he wanted me personally to take charge of this cricket.  God, he did such a wonderful job that I walked out very happy and said, "What a wonderful place this is!" I told him years later that my intentions were to quit that day, so I had had a real professional snow job done on me." - Walt's People Volume 3 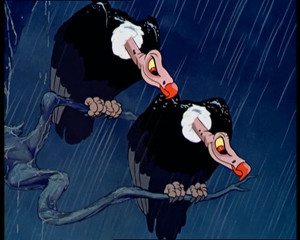 Some of Kimball's work did make it into the final picture: the vultures at the end of the movie, when Snow is running through the woods, and when she wakes up and the animals befriend her were all his work.  The metropolitan Museum of Art wanted some cells from the film and chose the two of the vultures (Kimball felt that was a lack of foresight)
Kimball felt that Snow White, even with it's imperfections, was never matched by any other cartoon in the heart, or believability.  He remembered being at the world premiere and seeing the stars of Hollywood tear up and that audiences continued to have that emotional reaction. According to Kimball, Snow White is a good example of the real secret of Walt: sincerity.
Kimball is well known for his sense of humor.  For one of the wrap parities for Snow White, he hired a guy to come to the party dress as a police officer to harass Walt that the party was too loud.
Kimball directed two Academy Award-winning short subjects including, "Toot, Whistle, Plunk and Boom," and "It's Tough to Be a Bird." During the 1950s, he produced and directed three one-hour space films for the "Disneyland" television show. The first of his television productions "Man in Space," was given a command performance before President Dwight Eisenhower.  Into the 1960s he worked on "Babes in Toyland" and consulted on theme park projects.
While at Disney, Ward, a trombone-player, also led several fellow Disney employees in the Dixieland jazz band "Firehouse Five Plus Two." He also restored and operated a full-size locomotive on his two-acre orange grove and was instrumental in sparking Walt Disney's own interest in backyard railroads.
Kimball retired in 1973 and spent time on his hobbies of paintings and railroads.  He died in 2002 in Los Angeles, California at age 88. In 2005.  While Kimball does not have a window on Main Street, but he has something even more unique.  Disneyland's engine number 5 is named Ward Kimball.
Posted by 1937 Fan at 9:00 AM

Labels: Snow White, They Made the Magic, Trains, Ward Kimball