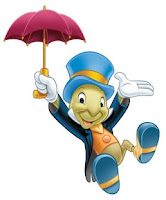 When we Disney fans hear this we think of that little green guy that helped Pinocchio find his way.  Snow White and the Seven Dwarfs was released before Pinocchio and Doc utters the phrase "Jiminy Crickets!"  In fact, Dorothy in Wizard of Oz and Mickey in Brave Little Taylor both used this expression too.  So where did this come from?  Dave Smith addressed this in his ask Dave column on the D23 website:

Dave Smith: The slang expression, Jiminy Cricket, existed long before it became the name of the cricket in Pinocchio. According to the Partridge Dictionary of Slang and Unconventional English: "Jiminy Cricket! used as a mild expletive. Extended from obsolete 'jiminy!'; 'gemini!', etc., which may derive from Jesu domine; modern use is probably intended to be a euphemism for JESUS CHRIST! US, 1848." Since the character was a cricket and needed a name, it is likely that some story man (or perhaps even Walt himself) suggested using Jiminy as his first name since it was a common expression (as opposed to using the more typical alliteration in naming animated characters and calling him Charlie Cricket or something with a C).
Posted by 1937 Fan at 5:44 PM