They Made the Magic: Dave Hand 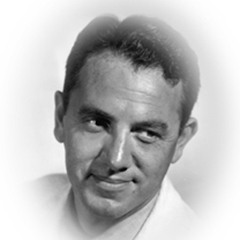 Happy Birthday to Dave Hand, born today in 1900.  Hand joined the Disney studios in the 1930 as their 21st animator and he worked for three years on the animated shorts.  He then became a director and is credited with directing 70 shorts and three features, one of which is Snow White and the Seven Dwarfs.  When asked how he became a director, Hand replied he really didn't know why Disney picked him to direct Snow White when there were five other directors.

In an interview with Michael Barrier, Hand explained why the first full length feature ended up costing so much more than planned:
"These Snow White characters that actually have these little idiosyncrasies, little twists and turns, and little walks.  Every animator had to know how to do it.  And there were, still, seven dwarfs, and of course, the live-action Snow White and the Prince and such, and also the beautiful backgrounds, and the designs of the dwarfs' house, and interiors...tremendous cost to that." (Ghez, Didier.  Walt's People Volume 1)

Labels: Hand, Snow White, They Made the Magic