They Made the Magic: Wilfred Jackson 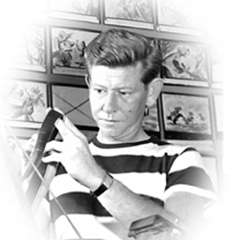 Happy birthday to Wilfred Jackson born in 1906.  Jackson was a sequence director on Snow White and the Seven Dwarfs.  After joining Disney in 1928, he worked on Steamboat Willie and pioneered a method of pre-timing animation with sound.  He directed cartoons, some of which were honored with academy awards.  Jackson went on to produce and direct for the Disneyland TV show.  He retired from the Disney Company in 1961 and was posthumously named a Disney Legend in 1998.

Frank Thomas and Ollie Johnson said "Jaxon (Jackson's nickname) was easily the most creative of the directors, but he was also the most 'picky' and took a lot of kidding about his thoroughness." (Disney Animation: The Illusion of Life)

Jackson also explained that Snow White was difficult for Walt.  In that Walt wasn't sure he could top it.  He wanted to avoid repeating himself but he wasn't sure he could do better than Snow White and Jackson suspected that was because the public would never be impacted the same way as it had been from Snow White.  (for more of this interview - Walt's People Volume 7)
Posted by 1937 Fan at 9:00 AM

Labels: Annimation, Jackson, Seventy-Fifth, Snow White, They Made the Magic