They Made the Magic: Paul J Smith 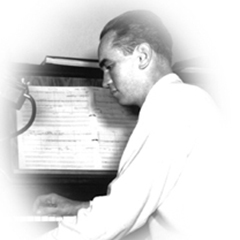 Paul J. Smith was born on October 30, 1906.  His father was a professor at a college in Idaho where he composed some songs for the school.  In 1934, he joined the Disney Studios.  He spent most of his life working for Disney as a composer, writing more than 70 scores.    He worked on Snow White and the Seven Dwarfs where he got the first of 8 Oscar nods (he won an Oscar for the score of Pinocchio along with Leigh Harline and Ned Washington).  He retired from Disney in 1962 died at the age of 78 in California, and became a Disney Legend in 1994.
Posted by 1937 Fan at 9:00 AM

Labels: Music, Oscar, Paul Smith, They Made the Magic