Destination D: 75 years of Animation: Snow White Still Fairest of them All

Okay, here we are, the panel you've been waiting for: Snow White Still the Fairest of them All!  Tim O'Day hosted this panel featuring musicologist and historian Alex Rannie, CEO of Walt Disney Family Museum Gabriella Calicchio, and 93 year old Marge Champion who was the live action model for Snow White. 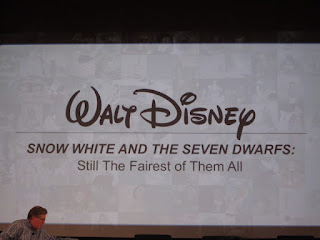 The panel began with clarfiying that the word soundtrack didn't exist in 1937 so the music was refered to as "the exclusive recordings from the actual sound film." Alex Rannie brought a variety of images of sheet music that Churchill, Harline, Morey and Smith worked on for the film. 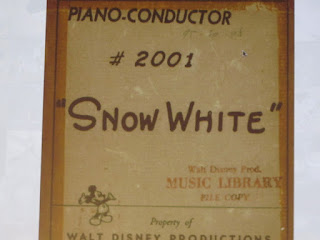 The Silly Song was in fact the third song written for the scene where the dwarfs entertain Snow White.  One version of the song was Never Too Old to Be Young.  There was another song called Lady in the Moon that was written before 1935.  In this song, each dwarf would sing a verse as a different anmal who was in love with the lady in the moon.  The song ends with all the animals realizing the lady in the moon is, in fact, the man in the moon.  Sleepy would have sang as a fish and Dopey a frog. One idea stuck, Sleepy still plays a fish clarient in the final film.  So the song that made it into the film was the Silly Song.   In 1935 there was the first national Hillbilly Championships in LA that inspired the yodeling.  The sound effects team worked on the Grumpy's pipe organ.  In order to get the correct sound, the team used jugs and the largest jug required so muh air, the player would pass out - only Jimmy McDonald would play that one.  At one point the song had a verse sung by Snow White!  The D23 audience was lucky enough to hear the recording session of Snow White's verse.


The next guest introduced was Marge Champion.  This 93 years young woman was gracious enough to come and talk to the D23 audience about her memories of being part of the team that created Snow White and the Seven Dwarfs.  She was hired as the live action reference model for Snow White.

Marge told the story of how she was hired to work for Disney.  Her father owned a dance studio and when Disney went looking for a girl to do live action shots for Snow White, Marge was in the right place at the right time.  She believes she wasn't the first to take on htis role because the bodice of the costume had two rows of hooks and eyes, suggesting that it was fitted for some one else.  (You can see the outfit she word at the Archives exhibit at the Reagan Library).  When asked if Walt was at the audition, she said she was sure he was there, but she didn't see him.

Marge also told of her life growing up: her father would go to Shirley Temple's house to teach her ballet and Marge knew Shirley.  When wanting to be excused from the dinner table, Marge was taught to say: "I've had an elegant sufficency, May I be excused?"

During her time at the studio, Marge would act to Adriana Caselotti's voice recordings.  The animators referred to the girls as Margiana Belchalotti (a mash up of both of their names).  Marge also remembers how the studio needed her to run through the forest for Snow White's frightening escape.  They hung clotheslines and attached ropes that would hit her like branches.  Ham Luske attached some to her dress.  She said it didn't take much acting because she was  terrified!  She though the whole structure would fall down at any minute.

The most interesting thing that Marge remembered was that at one point, animators thought that Snow White's head should be larger than her body as was a popular style of animation in those days (think Betty Boop).  In order to test this, Marge was given a football helmet that was painted with a wig and bow.  She remembered having to wear it and under the hot lights, she became dizzy and almost fainted! 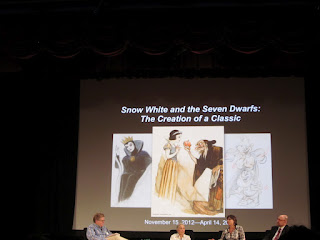 The final panelist shared some of the artwork that will be featured at the Walt Disney Family Museum when the exhibit opens this fall.  They also announced D23 would hold an event in November.  I can't wait to see some of these in person: 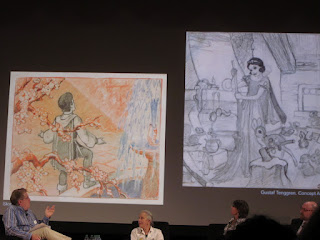 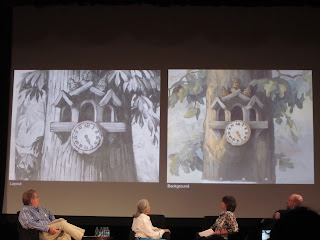 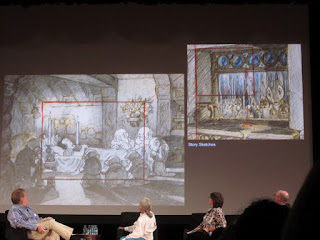 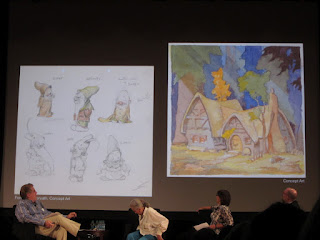 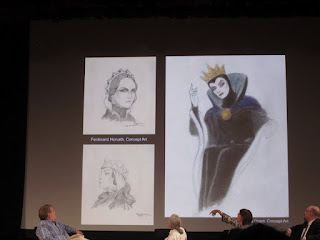 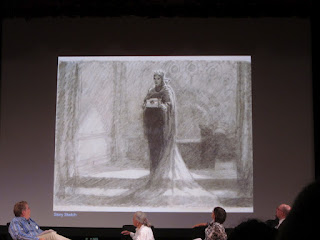