They Made the Magic: Marge Champion

Continuing on with the series of people who worked on Snow White, Marge Champion is one who I've talked about before.  Marge is one of the few who are still with us who can say: 'I was there!' 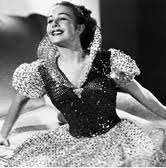 Marge was born September 2, 1919 in Los Angeles, California.  Her father owned a dance studio and learned at an early age to dance.  She was hired by the Walt Disney Studio as the live action reference model for Snow White.  She later preformed this same task for the Blue Fairy in Pinocchio and the dancing hippos in Fantasia.

Marge was married to animator Art Babbit, but later married Art Champion.  She and Art had a successful dancing career that included film (Showboat among others) and a television show.  She and Champion were married until 1973.  In 1977 she married Boris Sagal (father of Katie), but lost her husband in 1981 in an accident on a set.  After her retirement she worked as a dance instructor in New York City and even appeared in Fame.

Marge has appeared at many events in recent years including TCM's film festival and D23's Detestation D where she has shared her thoughts.  Marge was also the guest on a podcast where you can hear her remembering her work with Disney.  She was named a Disney Legend.
Posted by 1937 Fan at 9:00 AM

Labels: Art Babbit, Marge Champion, They Made the Magic