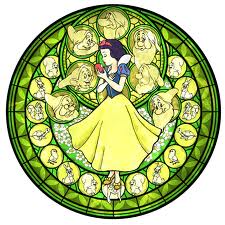 It's hard to believe it's been 10 years since the Disney Kingdom Hearts series began.  The first game was released in 2002.  I love this stained glass that is seen in the games.  In the game Birth By Sleep, there is even an entire level dedicated to the world of Snow White: the Dwarf's Woodlands.  One of the villains? - the Spirit of the Magic Mirror!
Posted by 1937 Fan at 9:00 AM