Last week I was able to head down to Hollywood to attend the D23 screening of Snow White and the Seven Dwarfs for the Turner Classic Movie Film Festival at the Grauman's Chinese Theatre.  What a treat to see her on the big screen and in such an amazing venue.  Gennifer Goodwin (from ABC's Once Upon a Time) and Lenard Maltin introduced the film prior to the screening. 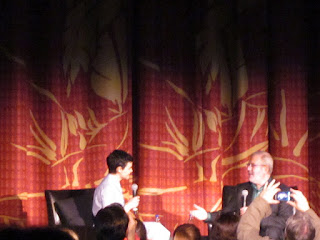 Marge Champion (Snow White's live action model) was also introduced to the crowd as she was in attendance.  Bravo D23 and TCM!