They Made the Magic: Albert Hurter 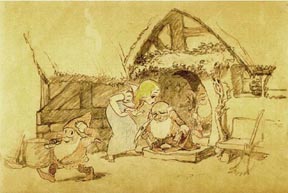 Albert Hurter was born May 11, 1883 in Zurich.  He studied architecture and then later moved to Berlin to study art.  In1912, after his father's death, he spent four years in New York and Paris eventually getting a job in 1916 s an animator with Barre-Bowers Studios where he worked on Mutt and Jeff.  He spent some time in Mexico and eventually come to Southern California working as a draftsman.  It was in 1931, at the age of 48, when he joined te Disney Studios working on characters, gags, settings, and storyboards.  He was assigned to Ted Sears story department along with Pinto Colvig and Webb Smith.  His sketches were imaginative with strange animals, scenery and costumes.  Hurter became the studio's first inspirational artist.
Hurter was some of the first artists assigned to Snow White and the Seven Dwarfs.  Hurter drew characters and backgrounds.  Hurter was considered an authority on the look of Snow white.  He sketched the scene of Snow White surrounded by the dwarfs in the glass coffin that brought celebration to tears during the premiere, his sketches suggested the dwarfs riding the deer to warn Snow White, and tying Sneezy's beard around his nose to stop the sneeze.  Hurtuer was one of the three artists that brought the European flair to the film (Tenggren and Hovarth being the other two).
He went on to work on Pinocchio, Fantasia, Dumbo, The Reluctant Dragon, Peter Pan, and Lady and the Tramp.  He died in 1942 and in 1948 Walt Disney had Simon and Schuster publish a collection of Hurter's work called He Drew as He Pleased.

Labels: Animation, Hurter, Snow White, They Made the Magic