Sunday at the D23 Expo 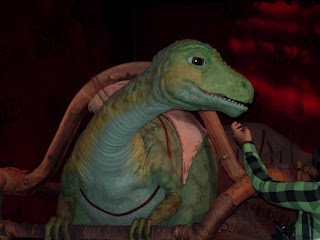 Sunday morning we were in the expo are at 8:00 am and immediately joined the line waiting for the future of Walt Disney and Pixar Animation talk with John Lasseter. Well, I should say my brother waited in line and I shopped. We had decided to leave the cell phones and cameras in the hotel rather than turn them in. To turn them in, you filled out an information card, put that, the electronics, and ID in a bag to redeem after the show. After having bags checked and going through the metal detecting security – we entered the area. Crammed into the bottom show floor we waited for an hour and a half. Lucky I had foreseen this and had copies E-Ticket with us to read and had some great conversation with neighbors.

The presentation began by showing the opening of Toy Story 2 in 3D. John talked about the upcoming double feature and Toy Story 3. Some announcements were made about what actor was lending voices (although not what character they were) with the exception of the return of Barbie and the debut of Ken. My favorite part of the whole presentation was seeing the lost footage of the Ken interview that was cut short due to the interviewers insinuation that perhaps Ken was not as manly as he believes he is (due primarily to the fact that he is a girls toy and Barbie’s name is so much larger than Kens on Ken’s box). We also heard about Cars 2, Winnie the Pooh, Tinkerbell, Rapunzel, and naturally, The Princess and the Frog. We were also treated to premieres of shorts inspired by Cars.

Once the presentation ended we joined the mass of people trying to exit. Luckily we had no phone to pick up so we were able to maneuver out with out waiting in line and make it to The Muppets Presentations. There we were told all about the upcoming events for the Muppets and treated to some content made just for D23. The best part? They gave away prizes! Everyone got a bracelet- but the raffle prizes were really quite nice. Sam appeared in Muppet (can’t say in person – can I?) and guests could wait to meet Fonzie and Gonzo – Kermit was on location at the VMA’s.

After the presentation we went back down to the hall to meet Wall-e and see Lucky again. We also got some more autographs from artists featured in the upcoming Art of Disney Princess Book. I also spent some time in the vendor area – rejoining the NFFC, buying back issues of magazines (Laughing Place, Tomart’s, and E-Ticket – we will miss you!) I have to shout out to the . I was missing issue 1 after buying all the back issues and I ended up winning one! That made my day.

I didn’t end up buying that much for the collection – just a Happy/Grumpy Cast Member Lanyard and the Dopey expo pin released Thursday that I had missed. I am sure there was more collectables earlier in the expo – but I waited to long. Which is fine, I certainly already did enough damage.

We had planned on staying through the Toy Story presentations but by 5pm we realized that driving home and going to work on Monday was be way to difficult, so as the voice of Disneyland announced that there was some confusion about the line and that people in line should call people not in the building to come back in, we left.

Can’t wait till next year.