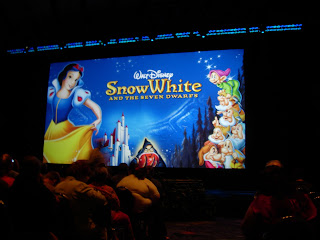 On Saturday I spent the morning on the show floor. The Snow White pin I wanted was released and I had decided to just do all my shopping that morning. After getting in line at 7:45, I got my voucher (It was a good thing what I wanted wasn’t LE 500 – those vouchers were gone already). When I got into the store around 8:30, I casually shopped around. When I was done, I turned the corner to pay and found a huge line! Well, I don’t remember how long I was in line for, but I am thankful I had my iPod as I watched an entire episode of Psych and still had leftover time. Silly me, Even with my past experience as a cast member, you would think I would remember that the pin fans are ser-i-ous!

I then went to the consumer products area to collect all the freebies, enter all the contests, and check out all the promos I could. There wasn’t a ton of stuff, but there were some great displays. I fell in love with the plush Pook-a-Looz (coming to Toys R Us soon) and the art of the Disney Princess Book and Couture line (pre-ordering book on amazon!)

While in line at the dream store I had the made the decision to forgo Imagineering Disney Parks in the D23 area in order to make it the Snow White panel (my true love…). I heard from others that it was impossible to make it from the area to the upstairs area quickly. We (my brother joined me for the rest of the weekend) went back up the third floor and the Snow White panel was great. Truly great animators were there, two great historians, and the live action model for Snow White shared her memories of being 14 and posing for the original animators. I loved the footage they showed – some of which will be on the new release.

We then went to show floor to explore. The Park and Resort pavilion was done right! Oh course there was a que line, a preview show movie, and a really cool entrance! The Cars land display was amazing but we totally fell in love with the audio animatronics display. We waited in line to meet Lucky the Dinosaur. That was so amazing! When is Disney bringing this technology to ? After wandering around the displays about , the upcoming Alaskan cruises, and Hawaiian resorts we left the pavilion.

The technology pavilion was where you could take a picture with the electrical parade turtle. I love that parade and it was a great idea to have him there with the photographers. (Love the photo pass idea and that there was always two cast members – one to take the photo pass picture and one to use your camera.) I tried out the Toy Story Mania Wii game – I had been highly anticipating that as I adore the attraction, but I was not impressed with the demo…we’ll see about that. The 3D technology showing the previews really was amazing. Family.com was giving out the cutest paper crafts and I can not wait to print out more at home!

After dinner we headed back for the Garibaldi show and the auction. I was so surprised at how few people were there. Even the auction bidders area wasn’t full. The art show was very interesting. That type of art is not in my style but Garibaldi is an undeniable talent. It was quite amazing to watch him work.

There were several items not sold in the auction but the items I would want – but couldn’t afford – naturally sold. The Snow White Wedding Dress and Diamond Bracelet went for $1,400 and $2,800 respectively. Of course the crowd favorite was the Peter Pan ride vehicle, which went for $35,000. I, along with all the other fans, wanted lot D23- the archive and studio tour with the fabulous Dave Smith ($13,000).

After the auction concluded we headed right up for the Sleeping Beauty panel and sat across the aisle from Tony Baxter (who waited in line with everyone else – bravo to him). The panel was fun to listen to and they had some neat things to share. What a great day!