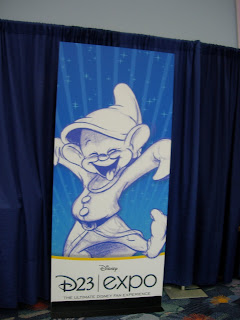 I arrived Friday evening, checked into my hotel (bravo for having such an efficient check-in), and walked directly over the convention hall. Big banners indicated the D23 expo with varies blue sketch characters hung down to show the entrance (although those were not the unlocked doors the rest of the weekend). Upon entering the entire hall I was surprised to see it was filled with electronic ticket check-in counters – and many of them were staffed. The convention center staff scanned the ticket, gave me my silver wristband, guidebook, and tote bag, warned me not to loose my wrist band as it would cost to replace it, and then sent me on my way.

Now like most fans, I had downloaded the guidebook days before and had already poured over the details of the schedule. But something happened when I got that printed book in my hand – I totally forgot my well laid plan and began to wander. I walked right into the main exhibit hall and was amazed at how large the hall is. The D23 welcome area greeted you first and beyond that you could see the colorful resort entrance. I immediately began just wandering around looking at everything. I was headed toward the dream store when I stopped myself and thought- Think! You did all that preplanning and you specifically checked into the hotel and rushed it over here to see a panel. So I regrouped and headed upstairs.

I think of myself as a mama bear fan. I’m not quite as avid a collector as many are but what I have isn’t anything to sneeze at. Additionally, while I won’t be winning any prizes in trivia I’ve read enough to get a few tough ones right. My interests lie primarily in vintage Disney history, , and Snow White and the Seven Dwarfs. Thus, most of the panels and presentations I choose surrounded on that.

As I rode the escalator up, I was surprised to see lines everywhere. I had hoped that this would not be the case. Upon asking a cast member, I discovered the many lines were in fact one line that twisted and turned down the hall. The cast members were guarding it quite well because of all the breaks that had to be included for crossing (they moved that que line to another area the next days – bravo whoever made that call).

So the first panel I went to was We Make the Music panel in the Storytellers Theater. The panelists were discussing the different attractions and areas that they had created music for. My favorite presenter discussed . He had a natural storytelling ability and really gave us a feel for what it was like. The panel went over the time (many, if not most, things did) so I had to leave before he was done to make it to the next panel.

The Disney Rarities was full when I arrived, but the cast member in charge, bless her heart, allowed us to stand in the back. It was well worth it in my opinion. We were treated with seeing a WWII training film for the Canadians, a informational film (featuring the dwarfs) on preventing malaria, a fantasia inspired short One by One, the Salvador Dali inspired piece from original artwork (yup- it’s odd), another fantasia inspired short featuring a Argentinean cat tormented by his tango partner tail – I can’t remember the cat’s name, and finally a Mickey cartoon that had never been seen – featuring Mickey as a talent agent for a opera sinning bee with a weakness for flowers.

The show floor had already closed but the archive exhibit stayed open until seven. I was able to walk and see items from Walt’s desk, original Pinocchio maquettes, Julie Andrew’s Mary Poppin’s dress, and Herbie. It was quiet and very few people were about so it was great to just wander around and enjoy the displays.

I left then to go get some dinner and returned to see the Walt & El Groupo panel. I can not wait to see this film. The history that was discussed was so lovingly researched that you couldn’t help but know that this film is gonna be great. The Saludos Amigos screening after was fun to watch in a whole new light after the panel had explained so much about the details of the movie’s origins.

After the screening I spent some time looking over the displays around the Walt Disney Studio Theater. I really think the displays were meant to be seen at night. The Tron light cycle looked alive at night. and Wonderland took on a whole new dimension, and the dragon from the Sorcerer’s Apprentice looked magical.

I headed back in for the screening of the Shaggy Dog. This was where I felt the first misstep in my D23 experience was. The panel consisted of two people and they never sat on the stage to talk – it was just a quick introduction and a quick shout out. I enjoyed watching the movie but was especially disappointed after seeing such great discussions previously.