They Made the Magic: Harry Stockwell 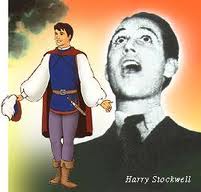 Harry Stockwell was born April 27, 1902 in Kansas city, Missouri.  He sang in nightclubs and eventually landed in some Broadway shows.  His film debut was in 1935 in Strike Up the Band.  He provided the singing and speaking voice for the Prince in Snow White.  He also played Curly from 1943-1948, replacing the original actor in the stage production of Oklahoma!  He continued his career in film into the seventies.  Stockwell was father to Dean and Guy Stockwell.  He died on July 19, 1984.
Posted by 1937 Fan at 9:00 AM

Labels: Princess, Snow White, They Made the Magic, Voice Actor