I started out this trip to the Disneyland Resort by going to WDW Radio's World of  Color Party.  We had resevered seating and I had a wonderful view of the World of Color Show.  I had seen it earlier in the summer and it was so much better the second time. The first viewing earlier this summer I  had seen that Snow White and her prince appeared near the Beauty and the Beast seegment but this time I also caught a glmpse of her in the finalie. 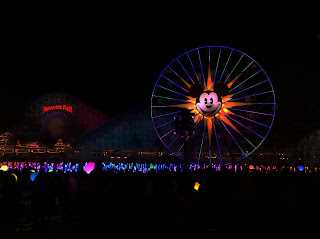 After the show our group was escorted to ride Soarin.  The park was closed at this point so that was a special treat. Then we were then lead to a dessert buffet in the winery.
But there was still one more surprise. we were fortunate enough to go back to world of color viewing area, walking past the Carsland and Mermaid construction with crews actually working removing the walls that ordinarliy block the guests view.  When we got there we were met by three imagineers who worked on and designed the show. They talked to us, showed us things about the show, and even replayed the Pochantas segment just for us.
It was an amazing event and while I didnt talk with Beci or Lou, I thank them for all they did and an amazing and afforable night. 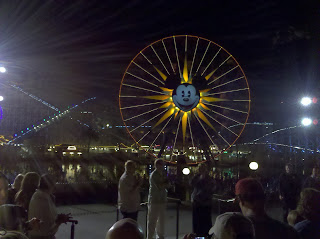