With the Academy Awards upcoming this Sunday there is a wide variety of information about Oscars of the past. For a nice look at Walt's history with Oscar see the D23 article. 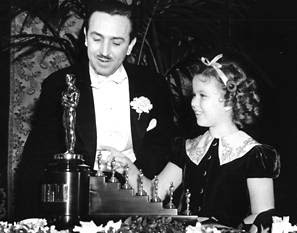 In 1939 the 11th award ceremony took place at the  Biltmore Hotel.  The ceremony was on Februray 23 (a Thursday - no less) and was hosted by Frank Capra, the then Academy President.  You Can't Take it With You took the grand prize (and what a great movie it is).  Spencer Tracy and Betty Davis took home the top awards.  Four out of the five best short cartoon were Disney (Ferdinand the Bull won).

And Walt Disney was given special recongniztion for:  "a significant screen innovation which has charmed millions and pioneered a great new entertainment field for the motion picture cartoon."

You can see the Oscars at the Walt Disney Family Museum.  You can find a list and some pictures of other Oscars here.  On March 23 1986 Tony Danza hosted Walt Disney Goes to the Oscars: you can find this special posted in YouTube.
Posted by 1937 Fan at 5:49 PM