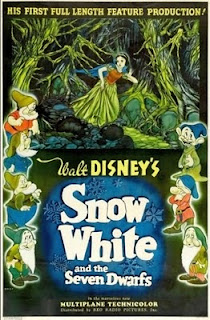 On this first day of 2010, I thought I'd share some of the firsts that Snow White and the Seven Dwarfs made. We all know that Snow White and the Seven Dwarfs was Disney's first full length animated feature but did you also know that Snow White was the:
* First movie to ever have a marketing campaign the same day as the movies release (thanks to Kay Kamen's ideas on marketing)
* First movie album ever to be produced utilizing the actual soundtracks recorded for the move
* First Book musical (where the music moves and tells the story rather than the popular variety style musical popular at the time). Oklahoma! is usually recognized as the first but it was released five years after Snow White and the Seven Dwarfs
* First Disney feature to be re-released because no feature was scheduled (1944)
* First movie to be exhibited simultaneously in more than 60 countries (1987)
* First Disney animated feature made into a stage show (1979 - read about Snow White Live! on this blog)
* First film to be restored with digital technique (1993 for the 8th reissue)
Posted by 1937 Fan at 8:10 AM