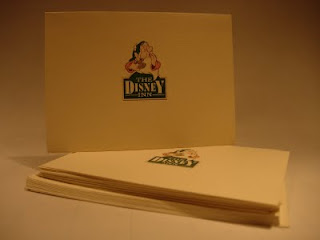 The Golf Resort in Disney World was renamed and redecorated and remodeled in 1986 with a Snow White theme and give the new name the Disney Inn. Sleepy was part of the logo as seen in the photo of the stationary.
According to The Disney way by Bill Capodagli and Lynn Jackson, the change was made because wives who were making the reservation for the family trip saw the word golf and avoided that hotel. Thus, the hotel was not getting the capacity the other were recieving.
.In 1994 it changed again to a military hotel (Shades of Green) and has since been torn down.
Posted by 1937 Fan at 6:42 PM