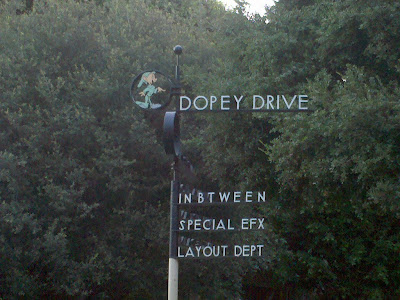 On June 25, I was able to head to the studio lot for the D23 archive event.  Southern California traffic being what it is our three hour drive (for about 70 miles) got us there just in time. 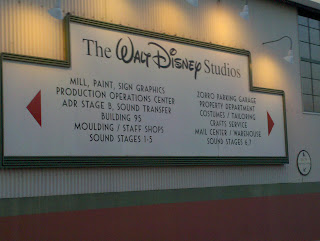 Upon entering the studio lot, we were directed to the Zorro parking lot.

Check in was quick, we got our programs and pins,

and headed to the theatre on the studio lot directly across from the old animation building. 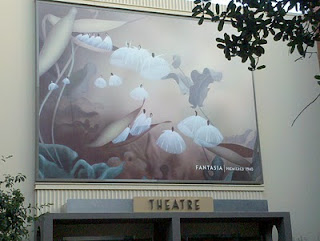 The evening began with a welcome from Steven Clark, Bob Iger took the stage to present Dave with his 40 year Donald Duck service statue.  Then Leonard Maltin took the stage and had a conversation with Dave.  Leonard Maltin did a fabulous job and there were some fun stories shared (one can only imagine the vast array of stories between them).  Becky Cline then welcomed in some new items to the archives, we were treated to the 'new' People and Places film "Archiving the Archives," and lastly Steven Clark presented Dave with his 40th anniversary pin. 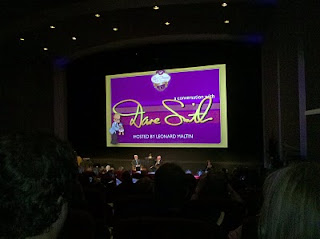 Dave Smith had been working on a Disney bibliography at UCLA when he was in a meeting with some Disney representatives.  He had already began some relationships with some cast members while gathering research.  UCLA had proposed to the studio that their collection of materials could be housed at UCLA, but through these meetings it was discovered that the university wouldn't be able to handle the vast collection.
So, Dave wrote to the Disney representatives offering to take a leave of absence from this job at UCLA.  Thus, his job with Disney began.

He was given an office in Walt's wing.  Walt's office suite had not been used since his passing and Dave admitted to sneaking in one night when the janitor forgot to lock it up.  He soon enough had the job of cataloging Walt's offices anyway.
The job sort of created itself as it went.  No other studio had any model (in fact other studios later based there archives on what Dave has done).  This was a time period where other major studios, like MGM, were selling off assets.  Disney was setting up a way to preserve them.  Dave had to go from department to department to convince them that the departments materials would better be housed in the archives.  Some were only to willing to get the space back, while others were more cautious but in the end, he prevailed.
Certain things, like music and publicity notices were easily found and the publishing department had kept a great deal of their works too.
But other things, like the early merchandise, were no where to be found.  Dave went around and bought up items for the archives.  A celluloid wind up Donald toy, mint in box, was bought at the Rose Bowl Swap meet for $18 (it now sells for $2,500).  At a Glendale toy show he found one of the three items made during the time Walt Disney made Oswald cartoons (a stencil set).
Dave also found a wealth of information from the old timers at the studio when he began.  All nine of the 'nine old men' were still around.  Ward Kimball drew a map of the Hyperion studio.  The Disney company had pictures of it, but now Dave knew what building was for what.  Dave related that some of the men talked and talked while others were more quiet and told the same story over and over.  While hunting around in a basement Dave found the snow globe from Mary Poppins in the janitors closet who had saved it from the trash, not knowing it's origin.
More recent stories of the archives was shared as well.  Michael Jackson visited the archives and drew lots of curious phone calls from staff and caused a sceptical Becky Cline to not believe the phone call.  Recently the prop and costume departments on the studio closed and the archives staff went through and took out everything they thought need to be included: mousketeer costumes, movie outfits, props from Roger Rabbit, Black Hole...The only problem? Nothing was labeled, they had to know their stuff.
Disney policy has now given the archives the first right of refusal on items.  So when WDI called and said they were redoing the attic in the Haunted Mansion, the archives ended up with the bride.  Of course, they wanted props to go with it (think display) so Becky and Steven got their hard hats and set out to Florida (without air conditioning) to take what they wanted.
The archives added a bunch of items to their collection that night: plane ticket from Lost, red queens scepter (the $9,000 hero shot version) from Alice and Wonderland, the sorcerer's Dragon ring from upcoming Sorcerers Apprentice, a light ring from Tron (the hero shot version), the sword from the Seeker TV show, a Pollyanna merchandise locket brought by a D23 fan, a wand from Wizards of Waverly place, Joe Jonas jacket, a letter from Walt to Roy, and the jacket worn by Jane during the "Love to Laugh" sequence of Mary Poppins. 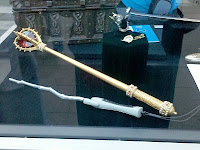 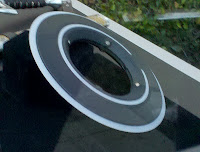 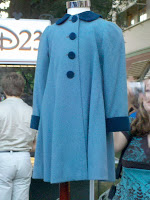 A few fun stories were shared by various executives presenting the items.  The head of the motion picture division shared that he had no idea that the Black Pearl could sail under it's own power and when it set off across the ocean, a few freight ships were surprised to see it sailing.  For Lost, they used a real plane on the beach of Oahu and the islands emergency system got several calls about a plane wreck before word got out it was a set.  Karen Dotrice (Jane in Mary Poppins) shared that her first day on set they made a cast of her 'bum.'  It was what she had to sit on during the "Love to Laugh" sequence.  The letter was brought by Roy P Disney and it was written at the end of a three year long feud between Walt and his brother, Roy.  In it Walt wishes Roy a happy birthday and relates "There was a time when we couldn't borrow $1,000.  Now I understand we owe 24 million." My how times had changed for the brothers. 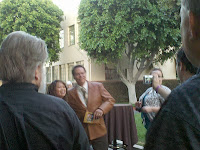 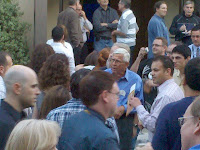 The evening ended with a champagne and cake reception.  Bob Gurr, Richard Sherman, Tony Baxter, Bobby Burgess, and Karen Dotrice were among the crowd.
All in all the event was great.  The archives and it's staff have set up a culture among the Disney company that preserving it's past and connecting with thier fans is part of what makes this company different from so many others.
Posted by 1937 Fan at 5:36 PM